Posted on 1 October, 2013 by fourbirdseducation

Sorry for the lack of updates over the last month. I have had to deal with two immediate deaths in my family as well as the news that the person who was the single greatest inspiration for me to create Four Birds Education has cancer and may never get a chance to see this endeavor get off the ground. I had debated whether or not I should explain my absence or not but I think it is important to let people know that I am serious about this endeavour and have committed to pushing it forward even though the person who most inspired me is no longer in my life. I have spent a lot of time over the last month thinking hard about what is important in life and what I would like to achieve with Four Birds Education. Having started this project feeling uncertain where I wanted to go and how far, I’ve decided I would like to push this project firmly and not be apologetic about it: we, as a society, have a crisis in how we treat children, treat each other and most importantly in how we treat ourselves. Self-loathing has not merely become accepted in our society, but open displays of self-deprecation have become trendy. My vision for Four Birds is to help teach people to appreciate what matters most in life is not money nor fame, but our relationships in ours lives with our children, our friends, our families and ourselves.

My goals this month are to finish off all of the essays on this web page, sort out my ABN and post some more content. Next month will the exciting phase of trying to promote and sell this business. So stick around, big things will be happening around here.

Posted on 17 August, 2013 by fourbirdseducation

Erica Goldson astonished her teachers and peers with her graduation speech about the public education system and the warped values pushed onto children by the state.  Her courage, wisdom and integrity is inspiring.  If the audio in the video is too difficult to follow the complete transcript of her speech can be found on her blog here.

Posted on 15 August, 2013 by fourbirdseducation

When I tell people that I am working on a business that promotes and supports homeschooling one of the first questions people ask me is how many children are homeschooled in Australia.  Typically I can immediately bring up statistics for the USA where estimates vary from 2 to 3.5 million children are currently being homeschooled.  This represents roughly 5-10% of school aged children and is a fantastic achievement for American parents.  But getting figures for Australian homeschooling is an entirely different matter.  In this article I will be discussing briefly about some aspects of homeschooling in Australia: number, media perception, reasons for and common prejudices towards homeschooling families.

A Word About Numbers

This is an extremely difficult question to answer.  One article I read cited the 2001 Census, recording 30,000 children were homeschooled at that time, but I have not been able to find this information on the Australian Bureau of Statistics (ABS) website.  Another study estimated 15,000 and this figure is on Wikipedia, however, this study is almost 15 years old now and it was a projection based on a limited sample size.  ABC news provided the figure of 50,000 in an article dated January, 2012 while a homeschooling website estimated the figure to be as high as 80,000.  So that is the extent of what I know and it is very sketchy at best. If the next census had a question specifically asking if parents homeschooled I do not think this would help as many families either homeschool illegally or they object to the government knowing every detail of their family life.  The short answer is that no one knows for certain, probably somewhere between 30 and 100 thousand but growing rapidly.  The number of children in government regulated schools was 3,589,986 for 2012, so that puts the estimated percentage homeschooled between 0.8% and 2.7%, so not such a far cry from the current US numbers after all. END_OF_DOCUMENT_TOKEN_TO_BE_REPLACED

Posted on 12 August, 2013 by fourbirdseducation

Narcissism is term you have probably heard used often in psychological contexts, but I want to stress here that when I talk about narcissism on this website I am actually using a lot of my own ideas.  My definition of narcissism stretches across multiple diagnoses in the current DSM including: Narcissist Personality Disorder, Borderline Personality Disorder, Oppositional Defiant Disorder and others.  The reason why I am doing this is because the modern psychological profession has a serious problem: defining mental illness beyond describing its symptoms.  In this article I am going to define narcissism and mental health in ways many professionals in the mental health industry would shy away from because talking about feelings is considered a scientific taboo.  I am doing this because the mental health problems we face today are too serious now to play “wait-and-see” we need to take bold action to define them, test our hypotheses and to heal them.  Just as a society of cripples can not thrive, a society of narcissists can never hope to prosper nor endure.

The Narcissism-Self-Esteem Spectrum. Bell curve is illustrative only.

END_OF_DOCUMENT_TOKEN_TO_BE_REPLACED

Posted on 10 August, 2013 by fourbirdseducation

Trigonometry is a branch of geometry; one of the major fields in mathematics.  The name literally means, “the measuring of triangles” (from Greek trigōnon “triangle” + metron “measure”).  As a child in school, I had a hard time understanding why the teacher thought it was so important for us to understand triangles.  When students in my class raised this question, the answer was typically that we should just be quiet and do our work without questioning the usefulness of learning trigonometry.  But it is difficult for anyone to work on something that is meaningless to them, we generally do our best work when it means something to us, that is, when we see a purpose for our labours.  So the first task a teacher of trigonometry must do is reveal to the person you are teaching why triangles are worth studying at all.  As such this article is not meant as an in-depth discussion of trigonometry, merely explaining the usefulness of the theory and pointing out various ways one could make it interesting for children to want to learn. END_OF_DOCUMENT_TOKEN_TO_BE_REPLACED

Posted on 6 August, 2013 by fourbirdseducation

Attaining mental health is not a simple task.  Just as we live in a world full of germs and parasites that can infest and harm our bodies, we also live in a psychological world of relationships with other people which are often full of psychological germs and parasites that can damage our mental health.  Consider the public school environment: it is hard to imagine a single day without being exposed to bullying, put-downs, oppression, humiliations, peer-pressures, misinformation or other psychologically harmful elements.  Often work and family environments are no better.  When we consider protecting our bodies from infectious disease it is often a good idea to sterilise or clean our living environment to keep ourselves safe.  However, as important as this is, without an immune system it is only a matter of time before one succumbs to infection and dies.  So avoiding harmful psychological environments is not enough, one needs to develop a psychological immune system. END_OF_DOCUMENT_TOKEN_TO_BE_REPLACED

The Future of Learning

Posted on 30 July, 2013 by fourbirdseducation

Apologies for the lack of new content.  I have been a busy working behind the scenes whenever I have had the time available.  I will return to regular content updates soon.  In the meantime, here is an interesting video about education, learning and school that someone sent me.  I hope you enjoy it. 🙂

Book: Will I Ever Be Good Enough?

Posted on 18 July, 2013 by fourbirdseducation

Since I read a lot of books about psychology, relationships, mental health and related topics, I will post reviews of books that I have read.  This time I am writing about a book that helped me a great deal to make sense of the behaviours I have observed in many people I know.  Although this book is targeted at women, I sincerely believe that there is a great deal of benefit for men interested in narcissism to read it too, if only to understand many of the young women they will meet on dates these days. END_OF_DOCUMENT_TOKEN_TO_BE_REPLACED

Posted on 12 July, 2013 by fourbirdseducation

How well do you know your native animals?  I studied biology at university and actually had the nickname “bio-boy” in high school because of my passion for the subject.  However, I was embarrassed recently when I discovered I could not name a single species of native eagle.   Curious, I started asking around and found that most Australians are woefully ignorant about which animals are native and could only list a half dozen species they knew of.  In other countries and in times past, learning the names of hundreds of native plants and animals was considered an important part of any school curriculum, in fact children were expected to know them even if they did not go to school.  No one can say for sure why publicly funded schools in Australia do not take it seriously to teach people basic facts about their country, but it is not just embarrassing for Australians when they struggle to provide interesting conversation to foreigners about their country, its history, culture, heritage and wildlife, it hurts them on an spiritual level because it discourages them from seeing their country as an interesting and exciting place to live. 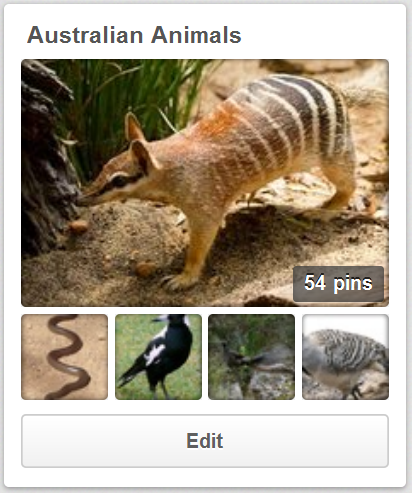 54 Iconic Australian Animals with some facts about each one.

Click the image above to be taken to the Four Birds Education Pinterest page where you can find 54 beautiful images of native Australian animals with some basic facts about each one to show your children, use as inspiration to create learning games or just to admire some of the splendor of Australia’s native fauna.

Here are some reasons why it is worthwhile to teach children about native animals: END_OF_DOCUMENT_TOKEN_TO_BE_REPLACED

Posted on 11 July, 2013 by fourbirdseducation

This is a thought-provoking video.  I agree with much of what Ken Robinson says, however, from an economic point of view governments have limited incentives to change or improve the education system.  In fact, I would argue that the problems described in this video were readily identifiable over one hundred years ago and as such are not recent discoveries.  However, in the case of ADHD, they are clearly getting out of hand.  If there is to be a revolution in education it will from parents brave enough to homeschool and from companies like Four Birds Education which have the potential to shame the government into abandoning their stranglehold on education.